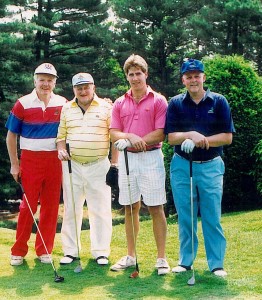 With the excitement that surrounds the Masters each year, it's a time of year in the Lakes Region where we are all antsy to get out and play. Kingswood Golf Club in Wolfeboro opened its greens for play on Wednesday, and I had to tell a few friends from Massachusetts "the flags are in" - which is usually the second and most important step after "ice out on Winnipesaukee." While I'm sure it's a bit damp out there, and the greens won't exactly be running at high Stimp numbers, it's still nice to be back out there. Lake Winnipesaukee Golf Club tried to do the prudent/economical thing this winter by delaying the opening until May 11th. This made sense, as few are around and, many years, that's as early as we can go - but of course our snow-less winter and very mild spring to date have the club dealing with some pressure to open sooner. While we're not exactly ready to hop in Lake Winnipesaukee just yet, the summer season is getting closer each day. So, on your next trip to the Lakes Region don't forget to bring your clubs!