Our mobile site is optimized for smaller screens.

TRY IT NO THANKS
MORE SEARCH OPTIONS Sold Search

Welcome to the Spencer-Hughes Real Estate blog! Here we cover everything from real estate tips and insight, to local news and events in Wolfeboro NH and the Lakes Region. 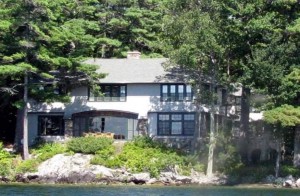 With Rick Santorum suspending his campaign today, it would seem that we're getting a lot closer to former Governor Romney winning the Republican ticket for this fall's presidential election vs. President Obama. From time to time we get asked about Governor Romney and his home on Lake Winnipesaukee, as we were lucky enough to sell the property to him, as well as an additional transaction of an abutting property years later. Prior to the NH primary I spent severaldays with various newspaper reporters from The L.A. Times, to N.Y. Times, to Reuters, to a Japanese newspaperand spent three hours one Sunday with a crew from Fuji TV in Japan. The reporter from Fuji TV was actually one of the main reporters that did the reporting from the nuclear plant that was damaged after the tsunami last year and they were incredibly nice. What struck me the most from the recent interviews was they truly wanted to find out if Governor Romney was truly as nice as he appeared to be, what was it like dealing with him in real estate and how is he perceived here in Wolfeboro? I guess what made it fun was that he truly is as nice as you see, both in person and in a business deal. I sold him a piece of abutting land to his home here in Wolfeboro and it was a relatively simple deal, that didn't require his involvement, but at no time did I feel "handled" and passed off to others. There were some interesting debates going on in Massachusetts then, yet he made time for me and offered up his private line, cell phone and assistant's direct line. I wish every deal was as professional and enjoyable as that one was, as he could not have been niceror more genuine. One of the questions that always comes up is "do you think Wolfeboro willhave thechallengesKennebunkport has with the Bush compoundsuch astraffic issues?" My personal opinion is that it won't be like that, at least not on the roadways, as there is no view of the Romney home from any roadway. The topography of the land is such that the houseblends in nicely behind some natural elevation changes. The Romneys havedone a brilliant job of having the house blend in with the surroundings vs. standout as some other trophy homes do. While the property is as nice as you'll find, it's house/buildings aremodest in terms of wherethey fit among the top lake properties. There are many more properties in the surrounding area that far exceed the Romney compound in value. We do believe boat traffic will likely accumulate a bit more in front of their home, but luckily it's not on the way to anything substantial, so it may not even affect traffic patterns on the water. Having the Romneys as neighbors is nothing but positive, and they were credited with rescuing folks from a sinking boat not far off their shore several years ago. Members of the family raced out on a watercraftto provide assistance to a boater in trouble. While it's hard to predict the fullimpact if he becomes our next president, I can tell you as a neighbor and someone lucky enough to have dealt with their family, we could use more Romney families in the world!